Download a PDF copy of the full report (9Mb)

Unsurprisingly, the village of Castle Combe in Wiltshire owes part of its name to an unusual motte and bailey castle situated on a spur of limestone close to the village. Although no excavation has taken place at the site, it is generally thought that most of the earthworks and masonry date to the 'anarchy period' of the twelfth century. 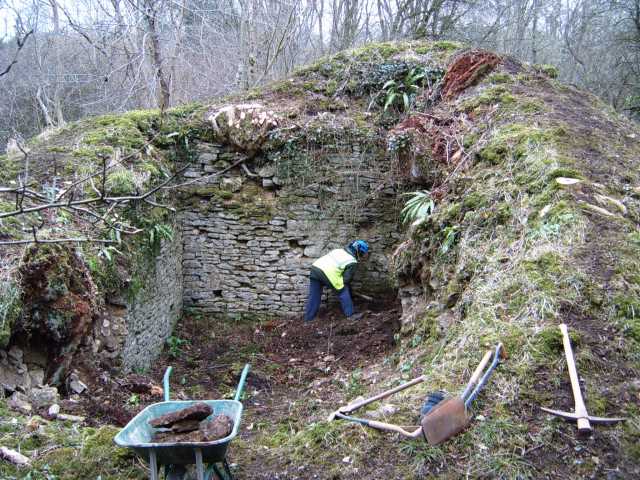 Initially, we surveyed the site in order to create a digital terrain model that could be used for analysis and display in Castle Combe Museum. Surveying conditions were tough - most of the site is wooded and many areas have dense blackthorn thickets, in addition, warm weather brings tick infestations.

In 2005, Cotswold Archaeology (CA report as a PDF) were commissioned to carry out controlled clearance within the remains of a substantial masonry structure, the remains of the keep. This was soon followed by repairs and stabilisation with 'soft capping' of the walls.

Following on from the consolidation work, we were commissioned to carry out geophysical investigations in 2007. The survey techniques included, magnetometry, resistivity and magnetic susceptibility survey. The results of the resistivity survey revealed a number of masonry structures within the inner baileys. Magnetometry in the outer bailey produced little evidence for development although an infilled substantial outer defensive ditch was revealed to the north of the castle.

The site is unusual in having a keep with at least four and possibly five baileys. It has been suggested that a former earthwork such as an Iron Age fortification has been utilised by the Norman barons of Castle Combe although there is no strong archaeological evidence to support this. Our survey does suggest, however, several phases of expansion perhaps occurring within a relatively short period followed by complete abandonment within the medieval period.

There has been some suggestion that the earthworks may have an Iron Age origin, G.P. Scrope (1853) believed that “ the earthworks….. seem to prove that a British camp existed on this spot before the erection of the Norman fortress in the twelfth century”. The SMR and NMR entries seem to hold contradictory evidence for this. The SMR entry states that “although its position is ideal for a promontory fort its defences, particularly on the north, are not consistent with Iron Age fortification” however the NMR entry states that “the location of the site and the survival of an outer bank at the NE end of the monument suggest the castle may have been built on the site of an earlier promontory fort, dating probably to the Iron Age”. These apparently conflicting views of the possible Iron Age origin of the site imply that further investigation is necessary in order to either support or refute this theory.

Clearly there is some contradiction in the view that the castle stands on a previous Iron Age promontory hill fort but there has also been speculation by antiquarian writers regarding the use of the site as a Saxon stronghold, subsequently destroyed by the Danes in the 9th century. Sir Richard Colt Hoare writing in 1821 considered that “ the foundations of walls, a raised mound, and other circumstances, induce me to attribute to it a Saxon origin, and history reports its having been ravaged by the Danes”. He also has a sketch map of the castle from the same time which shows that the original entrance was further north than today (Hoare 1821). John Aubrey (in Jackson 1862) also supports this theory, and evidence seems to have originated with the writings of William of Worcester, steward to Sir John Fastolf, the Baron of Castle Combe in the mid 15th Century. Cited in Scrope (1852) William of Worcester states “there was a castle in the middle of the park here, seated upon a hill, which was destroyed by the pagan people coming from the kingdom of the Danes, as invaders and enemies of King Alfred, in the year of Christ eight hundred and seventy eight”. Despite these antiquarian comments there has been no direct evidence for Saxon occupation or Danish destruction of the site, although the SMR entry states that iron arrow heads, bucklers, spurs and a few “Saxon” coins have been found in the castle area.

The building of the castle is generally attributed to the Dunstanvilles, Barons of Castle Combe during the 12th century although there is some uncertainty to its actual construction date. It is possible that the castle was constructed as the chief seat of the Barony of Combe, when it was consolidated by Reginald de Dunstanville during the reign of Henry I (1100-1135) (Scrope 1853) although it is possible that it was constructed by his son of the same name. Reginald was believed to have supported the Empress Matilda in the civil war against King Stephen (1135-1154) and the SMR and NMR listing suggests a tentative date of c. 1140 to support the evidence that this was an Anarchy Period castle. Other Anarchy Period castles are known to have been built during this time of political instability and many of them in the region were constructed by supporters of Matilda, such as Trowbridge Castle built on the site of a former prehistoric, Saxon and Saxo-Norman settlement (Graham and Davis 1993). Creighton (2000) surmises that the castle is unusual in having no conventional documentation. Confusingly he believes the site is most likely to have been constructed during the reign of Henry I but “an initial Anarchy-period fortification on the site cannot be discounted”. William Camden (1610) ascribes the castle to a later generation, Walter de Dunstanville (d. 1194) who was the son (or grandson) of Reginald and he believes that Walter was responsible for the castle construction, likely to be during the reign of Henry II (1154-1189) but this is disputed by Scrope (1853).

By the 14th century it appears that the seat of the Barony had transferred to the Manor House within the village of Castle Combe and a deer park had been created next to the Castle sometime before this (Watts 1996). The outer bailey also contains two medieval pillow mounds. According to William of Worcester the “castellum” had been destroyed by the reign of Henry IV (1399 –1413) (Scrope 1852). John Aubrey states that by the 17th century a market was traditionally held on the site (in Jackson 1862).

During the 19th century, the land owner William Scrope built a tower close to the southern tip of the site to mark the position of the castle. This was destroyed in 1950 but the remains of the tower mound and some substantial masonry blocks are visible. Although there is no documentary evidence, a formalised entrance way has been constructed through the southern bank and is likely to be contemporary with Scrope’s tower.

Limited archaeological investigation was carried out by Cotswold Archaeology in 2005 within the shell keep. The remains of a substantial building, possibly the keep, were recorded as part of a programme of works carried out to stabilise the structure. Loose material was removed from inside the structure although the original inner base was not exposed for reasons of structural safety. A single pottery sherd found within loose wall material was given a broad date of 10th to 12th centuries.

Archaeological Surveys have carried out topographic surveys across the site for approximately 5 years. The work was started by David Sabin and Kerry Donaldson prior to the formation of  Archaeological Surveys. The objectives of the survey were primarily to produce a digital terrain model of the site by recording the earthworks in detail using a total station. It was apparent that previous mapping of the site was either inaccurate or did not hold sufficient detail to fully understand its layout. Probably one of the main limiting factors to accurate mapping and surveying in the past had been the location of much of the site within woodland. It was hoped that the new survey work would provide an accurate model of the site that could be interrogated using 3D modeling. The work is ongoing as the terrain is particularly challenging, much of the interior of the site has been recorded in detail although the outer ringwork requires completion.

Despite the uncertain and sometimes contradictory documentary evidence for the construction and use of the monument, it seems likely that it is the result of several stages of development and re-use, and there is great archaeological potential within the site.

Scrope, G. P., 1853. Abridgment of the History of the Manor and Ancient Barony of Castle Combe.