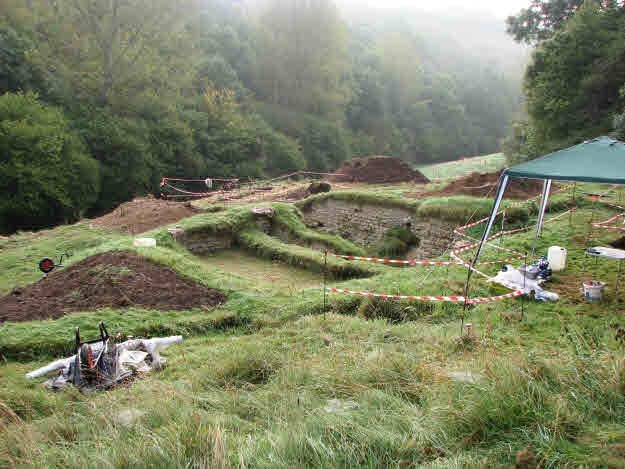 Download a PDF copy of the full report (8Mb)

Excavations close to Truckle Hill Roman Villa in Wiltshire have revealed a remote bath house perched on the edge of a wooded valley. There appears to be a number of phases to the building, with incredible preservation of some of the walls due to hillwash debris that has buried the site with up to 2m of soil. Archaeological Surveys Ltd have carried out numerous research surveys across the site with interesting results, and we were commissioned to carry out geophysics and LiDAR analysis across the main villa site and surrounding area.

The magnetometer response to Roman walls was clearer than expected possibly due to clearance of structural debris during mid 19th century excavations at the site. Negative magnetic anomalies indicating the position of stone walls correlated well with the mid 19th century plan produced during the original excavations. The magnetometry has provided a precise location for the plan within the survey area and has indicated that it is an accurate portrayal of the excavated features. Variable magnetic response, correlating with the location of some of the buildings visible in the plan, indicates the possibility of severe disturbance to some parts of the site by ploughing.

The survey has revealed evidence of a large ditch to the west and south of the villa complex possibly indicating a substantial defensive work and, from the geophysical evidence, it has been tentatively interpreted as a possible late Roman feature. Weak curvilinear anomalies to the south of the enclosure ditch may, by contrast, be indicative of early Roman or late prehistoric features; the interpretation is tentative.

Crossing the central part of the surveyed area, a ditch located by magnetometry lies immediately north of a low earth bank still extant within the field and also visible within LiDAR (Light Detection and Ranging) data. This feature may be defensive and could be the northern part of a naturally defended promontory. Ditch-like anomalies located at the southern tip of this promontory include a circular enclosure approximately 45m in diameter, and a prehistoric origin is suspected.

LiDAR data have been used to complement and develop the interpretation of the geophysics and of features within the surrounding landscape. An earthwork, crossing woodland to the north and north west of the survey area, can be observed within the LiDAR data and may indicate a Roman road linking the villa to the Fosse Way.

The geophysics has successfully demonstrated the high archaeological potential of the site, and has provided an invaluable record to aid management and interpretation, as well as provide accurately located features for future archaeological investigations.

Truckle Hill Roman Villa (SAM number WI 878) was excavated in 1859-60 by George Poulett Scrope of Castle Combe. The excavations revealed a substantial villa containing sixteen rooms, including a bath suite, within a large building towards the north-eastern corner of the field, see Plates 4 - 6. A courtyard, two further sets of buildings and a cemetery including four burials were also discovered (Scrope, 1862).

Recent archaeological investigations by Wessex Archaeology (Wessex Archaeology, 2008), with funding from English Heritage, have involved excavating and recording the remains of a Roman bath-house approximately 150m to the north east of the villa and set into the western side of a narrow valley. There is evidence that this bath-house was richly appointed and was constructed in two phases between the late 2nd and the late 3rd or early 4th centuries. Subsequently, part of the building was used as a corn drying oven during the 4th century.

Follow the link to find out more from the Wessex Archaeology web page.