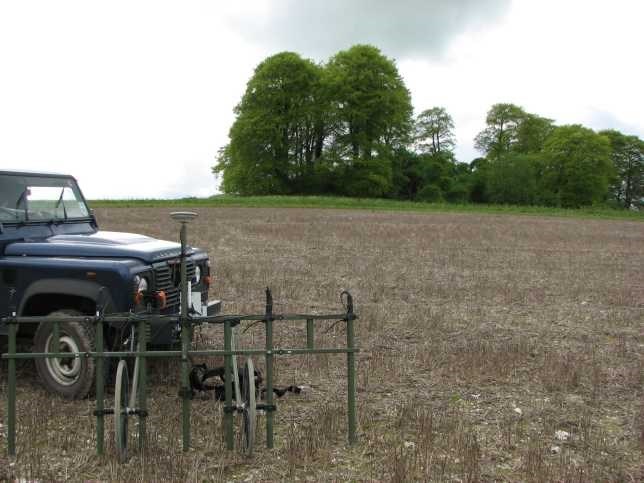 Download a PDF copy of the full report (6Mb)

A geophysical survey was undertaken within a single arable field at East Kennett Manor Farm near Marlborough, at the request of landowners Mr and Mrs James Cameron. The survey was carried out over the site of a scheduled bowl barrow, 200m east of East Kennett long barrow forming part of a barrow cemetery (Monument No: 1014036 (SM 28103)) under the Environmental Stewardship Higher Level Scheme, which aims to protect the underlying archaeology within the field. Two further potential round barrows and a linear feature have also been recorded either side of the scheduled round barrow from aerial photographs of the field. The site lies immediately east of the East Kennett long barrow. A detailed magnetometer survey was carried out over the entire 11.2ha field and the results show the location of the scheduled round barrow in the form of a 30m ring ditch with some indication of the internal mound. An earth resistance (resistivity) survey was also conducted over the scheduled barrow and within an area to the west targeting further archaeological features. The resistivity survey indicates that the mound of the round barrow appears to have been truncated, most notably on the northern and eastern edges, and this is reflected in the magnetometry data.The location of the two further ring ditches, recorded from aerial photographs either side of the scheduled barrow, have also been confirmed. They make a linear arrangement of three ring ditches. These can be seen to the south west as a 30m ring ditch and to the north east as a 32m by 28m elliptical ditch. The presence of a linear ditch extending towards the north western edge of the north eastern ring ditch has also been confirmed. A number of previously unrecorded features have also been located, including several linear ditches and two discrete circular anomalies situated in the vicinity of the round barrows. The eastern edge of a further scheduled barrow is projected to encroach just within the western edge of the field, but neither techniques show any corresponding ring ditch feature in this location. The survey has also located a previously unrecorded ring ditch which may indicate a fourth round barrow situated close to the north western corner of the field. This ring ditch appears to have pit-like anomalies within the interior, and a 25m diameter. A number of linear, rectilinear and discrete anomalies have also been located in the northern part of the site, but it is possible that these relate to natural features formed in the Quaternary period under periglacial conditions and resulting in an increased depth of topsoil within linear and discrete depressions. In the southern part of the site, two positive linear anomalies relate to linear ditches spaced 50m apart. They appear to extend for 200m towards the south eastern end of the East Kennett long barrow and an association is possible. These may have been truncated by a series of parallel linear anomalies possibly representing former land divisions or lynchets. Situated in the south eastern corner of the survey area is a rectangular enclosure which appears to be formed of an outer ditch with internal bank and a further bank and ditch crossing the interior. It is possible that this feature relates to an unrecorded medieval sheep fold enclosing an area of approximately 0.5ha.

The survey area lies within the Avebury World Heritage Site and is located immediately east of East Kennett long barrow. The field contains a scheduled bowl barrow, 200m east of East Kennett long barrow forming part of a barrow cemetery (Monument No: 1014036 (SM 28103)). The bowl barrow survives as a low spread of material approximately 40m wide and 0.3m high, with a 2m wide ring ditch surrounding the original extent of the mound. It has been recorded as a Tumulus on Ordnance Survey mapping since 1924, although the position is slightly inaccurate (see 4.1.2). Two other undated ring ditches have been identified from aerial photos (NMR SU 1166/13 29th March 1990) 100m to the north east and south west of the scheduled barrow, together with a linear feature (Crutchley, 1992). A second scheduled ring ditch relating to a bowl barrow 50m north east of East Kennett long barrow forming part of a cemetery (Monument No: 1014039 (SM 28106)) just encroaches into the western part of the field. Round barrows are funerary monuments dating from the Late Neolithic period to the Late Bronze Age period, although the main period of construction and use was between 2400BC and 1500BC during the Early Bronze Age (Field, 2011). They are generally constructed as an earthen mound covering a single or multiple burials, surrounded by a single ring ditch or multiple ring ditches. There can be a complex sequence of construction and use, including internal structures such as platforms, pits and stone cairns. Secondary burials and flat graves have also been located within and close to round barrows (Cleal, 2005). The most common example is the bowl barrow, which consists of an internal bowl shaped mound, surrounded by a ring ditch. Groups of these barrows are often found in association with other earlier and contemporary monuments, and it appears that the Neolithic East Kennett long barrow became the focus of a Bronze Age barrow cemetery, with at least nine round barrows in the close vicinity. One of these round barrows, situated 300m to the east of the scheduled round barrow, was excavated by the Rev R C Connor in 1840 and a beaker vessel, a bronze dagger and a stone battle-axe were found with a crouched adult inhumation within a central grave pit beneath the mound (Merewether, 1851; Kinnes, 1978). The geophysical survey is likely to locate the scheduled round barrow and other potential non-designated archaeological remains. The outer ring ditch is often all that can be seen of the remains of the barrow within magnetometry data. It appears as a positive curvilinear anomaly, which is a response to the increased depth of topsoil within the ditch. Earth resistance data can show the outer ditch as a low resistance response, sometimes with a high resistance response to the internal mound. It is possible that other internal features may also be located through both techniques. During the course of the survey, the field surface was very suitable for the observation of cultural material. No significant scatters of material were noted although 3 flint implements were found on the flatter ground on top of the hill. The items consisted of two round scrapers and a crude flake with retouch possibly also representing a scraper; the objects were not retained and were left on the field surface. A small amount of post-medieval pottery and tile was also noted and this was considered likely to have been introduced through manuring. Modern ferrous objects including broken plough shares, 'angle iron' fencing posts and tractor parts were frequently observed. Occasional small fragments of sarsen stone were noted across most of the field, although a distinct concentration is present towards the south eastern corner.

Merewether, J., 1851. Diary of a Dean, being an account of the examination of Silbury Hill and of various barrows and other earthworks on the Downs of North Wilts. London: George Bell.