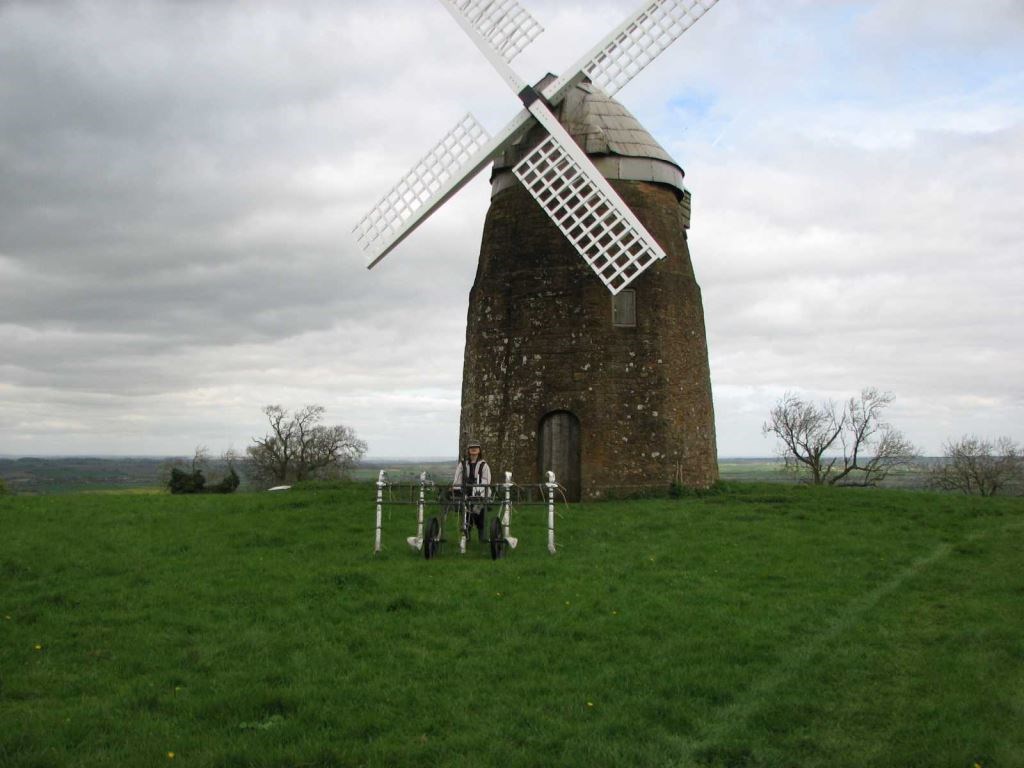 Magnetometry undertaken at Tysoe, Warwickshire in 2017 and 2018 has revealed further evidence for extensive Romano-British and prehistoric settlement. Several sites previously identified by fieldwalking in the 1990s, and geophysics in 2010/2011, were chosen for additional wide area magnetometry survey. The results indicate numerous enclosures, field systems and track ways surrounding core settlement areas. The complexity of many of the sites infers long periods of settlement, possibly from the Bronze Age to the end of the Roman period.

Survey has so far demonstrated over 30ha of archaeology and with anomalies extending beyond the survey limits at most sites, this would infer that a considerable amount is yet to be discovered.

In 2018 a report (J705 PDF report) was submitted to the CBA (Council for British Archaeology) as a requirement of the Mick Aston Archaeology Fund. Local residents Kevin Wyles and Dr John Hunter were successful in obtaining a small grant from the archaeology fund which allowed geophysical investigation of 6 sites considered to have archaeological potential. A summary of the report is set out below. The earlier 2010/2011 survey report can also be downloaded here (J311 PDF report).

Tysoe lies within the fertile Felden area of south Warwickshire which forms a broad zone of variable soils between the Edge Hill escarpment and River Avon. The underlying heavy Lias clays combine with thin layers of sands and gravels, remnants of glacial outwash, to form fertile and tillable soils. The glacial material is often thicker on elevated land where it has better survived fluvial erosion, but Tysoe has an added advantage due to its close proximity to the Middle Lias escarpment where head deposits formed in periglacial conditions have broken down the Marlstone Rock Bed, forming a band of good quality loam soils when mixed with the Lower Lias clays in the adjacent vale. The area also enjoys a generally moderate climate with comparatively low levels of rainfall, although winter temperatures can be exceptionally low during frosty weather. The area is also well served with good quality spring water emerging from the escarpment that flows into small streams and on into the catchment of the River Stour.

The topography within the parish ranges from the high plateau of Edge Hill escarpment, with its steep scarp slope running along the south eastern side of the parish, to the much lower and gently undulating Vale of the Red Horse. The scarp faces towards the north west and from the most elevated land an extensive horizon can be seen from the Cotswolds to the west and south west to the Malverns and Shropshire hills in the north west and Birmingham and Coventry to the north. The villages of Lower, Middle and Upper Tysoe lie at the foot of the scarp as do the many of the archaeological sites, although others do appear to take advantage of a mid-scarp terrace relating to the underlying solid geology.

The fieldwalking carried out in the 1990s identified and mapped scatters of Romano-British material along with some potential Iron Age pottery and scatters of worked flint. Most sites also contained fragmented marlstone rock from the nearby escarpment and occasional terracotta tile, including box flue tile. The distribution of this material often indicated severe disturbance due to medieval ridge and furrow cultivation and recent cultivation. Pasture land within the parish that has seen little modern cultivation often contains exceptionally well developed ridge and furrow earthworks, many of the arable sites saw the removal of these from the mid 20th century by deep ploughing or infilling of furrows and leveling of ridges. The impact of the ridge and furrow is often severe with complete truncation of remains within furrows adjacent to potentially well preserved strips of archaeology under the ridges. This truncation is clearly visible within the magnetometry data as narrow bands of negative response cutting through linear positive anomalies.

In 2010, our geophysical surveying initially targeted four areas identified from the fieldwalking results. One site on Sunrising Hill or Madhill had previously been used to test an early design for our in-house constructed resistance meter in 1995, and the results of this demonstrated the location of a substantial Roman building. The magnetometry data indicated that three of the sites contained numerous anomalies suggesting phasing and occupation over a long period, probably extending from the prehistoric to the end of the Roman period, although one of the sites close to Tysoe church may also contain post-Roman features as Saxon pottery sherds were present in the fieldwalking collection.

With the identification of further sites by Kevin Wyles and additional geophysical trials, a campaign of survey, supported by the CBA's Mick Aston Archaeology Fund, was undertaken in 2017 with additional work in 2018. The surveys have mapped and confirmed the presence of another four Roman or multi-period sites with extensive archaeological features over many hectares. In addition, we are starting to see features on a landscape scale with tracks, droves and field systems so that rather than considering sites as separate core settlements, we are now seeing how they exist as components within a settled and fully exploited zone.

Although there is little evidence so far for nucleation on any real scale, the close proximity of what appear to be  farming units would imply a symbiotic relationship originating in the prehistoric and continuing through the Roman period. Many of the sites demonstrate the presence of numerous enclosure ditches that tend to change from rounded or oval in shape to rectangular and square and this probably relates to physical changes relating to Romansation of the population and the adoption of different farming practices or perhaps even the effects of a wider market economy. These changes to the morphology of enclosures that probably represent paddocks and small fields immediately adjacent to farm settlements, may well occur at the same time as fundamental changes to the construction of the buildings also. Small ring ditches visible within the magnetometry data indicate the presence of round houses typical of the prehistoric style of building immediately prior to the Roman conquest but probably also continuing into the early Roman period. The fieldwalking evidence from most of the sites provides evidence of concentrated stone and tile scatters derived from the remains of Roman stone built structures, the geophysical data support this in that fragmented negative anomalies probably relate to intact wall remains; however, magnetometry is not the best technique for locating structural remains and a campaign of resistivity or ground penetrating radar survey would assist in further understanding the nature of these stone buildings.

The long-lived settlement sites clearly disappear prior to the onset of the medieval period as virtually no medieval cultural material was located at any of the sites with the exception of one site very close to the current village where a small number of Saxon sherds were identified. In addition, ridge and furrow cultivation is well developed at Tysoe and its morphology suggests that it is of great age, probably originating in the late Saxon period around the 9th/10th centuries; the majority of the sites demonstrate truncation by the furrows including some of the more substantial enclosure ditches suggesting centuries of ploughing over the settlement remains. Typically at the end of the Roman period many structures appear to have continued in use for some time before abandonment and we can only suggest that the focus of settlement becomes somewhere within the current settlement of Tysoe probably at some point in the early Saxon period.

We've generally avoided getting involved in the debate surrounding the Red Horse of Tysoe hill figure but for other researchers it's perhaps worth noting the close proximity of these early settlement sites to the escarpment and to the possible location of the earliest hill figure.

Although we are building up a picture for early settlement at Tysoe it's not unique within the Felden zone of Warwickshire. Our discovery of the Pillerton Priors roman villa with mosaic floor, a few miles to the north, gave impetus for a campaign of geophysical surveying that demonstrates widespread archaeological remains extending back probably to the Bronze Age.

Archaeological Surveys Ltd carried out magnetometry over ten areas representing five separate sites within the parish of Tysoe, Warwickshire. Each site was considered to have potential for Romano-British remains based on fieldwalking evidence, cropmarks or topography. The surveys aimed to improve understanding of the Roman History of Tysoe and the work was funded by the Council for British Archaeology's Mick Aston Archaeology Fund.

Survey at Downs Farm, to the south of the village, located a complex area of enclosures and archaeological features covering at least 3.5ha. The site is likely to have seen development over a long period with evidence for changes in the morphology of enclosures and their periodic renewal resulting in a mass of anomalies. Other features include ring ditches, pits and trackways. It is likely that the anomalies represent a farming settlement with its origin sometime in the prehistoric and continuing through the Roman period.

Magnetometry carried out over 7.8ha to the north east of Hopkins Farm located extensive anomalies relating to ditches and enclosures associated with Roman and possible prehistoric settlement and agriculture. Several small ring ditches, probably relating to former roundhouses, and small pit-like anomalies, possibly relating to post built structures, were also located. Anomalies are likely to extend beyond the limits of the survey in all directions suggesting that the full extent of the archaeological remains is uncertain and could be considerably more that that surveyed.

The survey at Feoffee Farm was centred around the location of a number of Roman vessels found during a small excavation. The site contains extant ridge and furrow earthworks with evidence of a past change to their orientation, the combined effect being severe truncation to archaeological features. Several fragmented enclosure ditches were visible in the data but the survey has added little to furthering the understanding of the site.

Previously unreported surveys to the north of the potential villa site at Madhill, adjacent to the A422, have also been included in this report. The results indicate a complex area of enclosures and ditches of archaeological potential disturbed by ridge and furrow but lying immediately south of structural remains of Roman origin identified from fieldwalking.

Magnetometry was also targeted on Windmill Hill, considered to be a possible Iron Age hill fort, and on circular cropmarks to the west of Tysoe. Although several anomalies of uncertain origin were located at both sites, no anomalies could be confidently interpreted as having archaeological potential.

The geophysics has proved successful in locating extensive archaeological deposits of Roman date within the parish of Tysoe and provide a significant resource for future research and investigation.